South to Switzerland, then on to Italy — Part 14 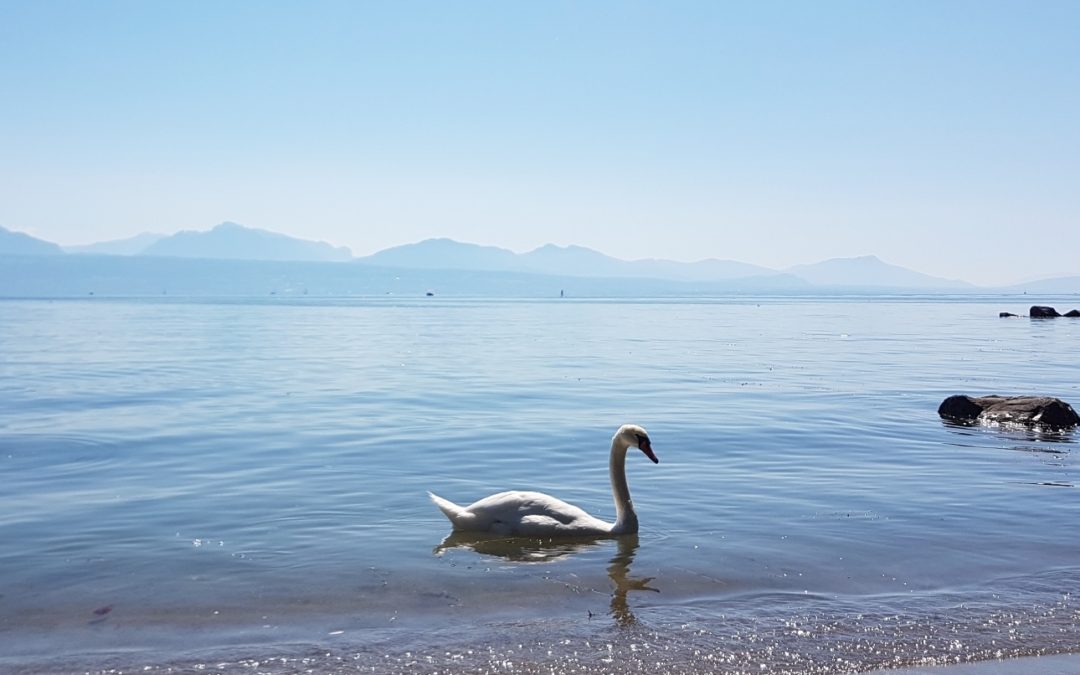 After breakfast the next morning, we did a little exploring and found a spot on the picturesque lake where we could go swimming. We donned the leotards we’d brought (figuring they could double as sleeveless shirts and bathing suits — mine was maroon and Terry’s was navy). They worked well, though maybe a little stretchy. No dolphins for us: we swam with swans! I felt timid at first and headed for the shore, but we both got used to sharing the water with these large beautiful birds and spent about an hour in the cool waters.

The hostel was open for us to shower before we left Lausanne. We journeyed south into the Alps! A very attractive fellow in leather hiking shorts named Paul picked us up.

“Where are you going?” he wanted to know.

“South” we responded in unison. We weren’t really sure what town we’d reach that day. He was heading in that direction so we joined him. His English was very good, so we abandoned our less-good French and shared back and forth about our travels. He’d been to the States several times. The next time I visited Switzerland and tried to see him, in fact, he was ironically on a trip to Mexico. In a letter I sent him I asked if he remembered me and he responded, “Of course I remember you! You were wearing a purple shirt and jeans!”

“Would you like to go hiking in the Alps with me?” he asked us. Though we were both tempted, we declined, feeling a little pressed for time. We did, however, ride with him for several hours. While skirting a beautiful lake, we stopped at one of the most picturesque castles I’ve seen in my life. It was a perfect photo op.

“Hey, Ter,” I yelled to her. She came over to me and sat on my knee. Paul snapped a photo with his camera and later, after I returned to the States, I received it in the mail. He and I corresponded until I returned to Switzerland a few years later and saw him again. 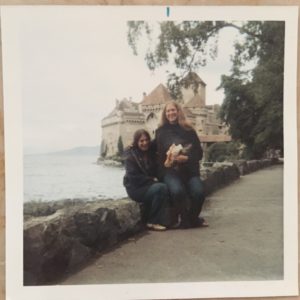 Our route going forward traversed the valleys between the Alps and took us back into France to its Mediterranean coast and finally the warmth we craved. The cities were expensive resort towns and beyond our financial reach, so we only made short stops. Outside the city of Nice, a family picked us up. They had one son, about 11 years old. We joined him in the back seat. The parents were very friendly, but the son obviously resented us infringing upon his space. As Terry dozed, she heard the boy talking in Italian to his parents and understood his dismay.

“They’re in my space. And they’re smelly. When can we let them out of the car?” he whined to his parents.

After several hours in the car, we reached the border and crossed into Italy. We stopped in San Remo where they dropped us off. In spite of their son’s obvious unhappiness, the parents offered to pick us up the next morning and take us to Milan, their destination and a stop along our route. They went off to a restaurant and hotel and we began to look for a place to sleep. The beaches, groomed and covered with row upon row of lounge chairs, were off limits to overnighters. We picked up a little food and found a construction site in the middle of town. It was a very uncomfortable place to stay and was also nerve-wracking. We didn’t know who would show up when. In the morning we found a café, brushed our teeth and washed our faces, had a quick breakfast, and were ready and waiting when our family showed up. We spent a long day with them and were dropped off at the youth hostel in Milan. They were done with us.

We thankfully were able to take showers in Milan and to do a little exploring. Then we were off to Florence the next day. It wasn’t such a long distance, so we arrived late in the morning, in time to secure beds in one of two hostels—the one in the city where we stayed, and the one outside of the city that was supposed to be wonderful. Arriving in Firenze felt like our real arrival in Italy. The Milan we saw was an industrial, no-nonsense city, certainly with beautiful cathedrals, but not a city dedicated to the arts. Firenze, however, was a place of beauty, a city-size shrine to the Renaissance, with frescoes, sculptures, churches, palaces, and other monuments from the richest cultural flowering the world has known.

Our plans, loose as they were, allowed us three days to absorb the exquisite sites Florence had on offer.  That and to begin to “absorb” the Italian cuisine and wine.

Read Italy: Some Great Beauty and Some Ugliness — Part 15