Paris! I could barely breathe for the excitement. Madame Hall, our high school French teacher, had made it a mecca, the go-to place for anyone who was anyone. I’d spent an hour a day with her for three years, breathing in her sophistication and beauty along with the vocabulary, accent, conversations, culture, newspaper articles, magazine articles, books. All in preparation for this moment: Paris!

But first things first: find a place to stay. By this time we were accustomed to checking out universities for likely cheap lodgings. Our speedy French driver dropped us in the 6th arrondissement where he told us we’d find many universities.

Ever practical, I discouraged Terry from stopping at a sidewalk café, even though we were both dying to sit and people watch and soak it all in. Paris! We walked the streets and before too long found what we were looking for: a student dormitory with accommodating fellow students. They showed us into a room that was vacant and welcomed us to stay for the 4-5 days we’d planned.

“Do you know where we can get some onion soup?” Terry asked one of the young women. She gave us directions to what they all agreed was the best onion soup in Paris. Paris! We showered, left our backpacks, and made our way through the empty alleyways to the tiny sidewalk café in an out-of-the-way industrial area, seemingly abandoned at the close of work each day. Only three small tables graced the narrow sidewalk and after a short wait, we nabbed one.

“On veut soupe a l’oingnon, s’il vous plait.” I ordered the soup and when it arrived, breathed in one of the most aromatic fragrances I’d ever experienced. It was a deep brown bowl with cheese crusted on the rim where it had melted over the earthy bread cubes covering the top of a savory, very rich oniony soup. (I’m getting hungry writing about it!) We actually returned three times to this tiny restaurant before we left Paris. I would never in my life be able to find the location, but am so happy that we were initiated into French cuisine with that first meal. Traveling on a $5 a day budget didn’t leave room for snails and paté.

Terry and I spent the next few days exploring Paris, primarily the art galleries and museums. The Louvre was massive and we made our way through it quickly, not terribly enthusiastic about what we were seeing. Craning our necks to see the Mona Lisa was disappointing and disillusioning. That changed at the Rodin museum, where we wandered the gardens admiring the powerful sculptures. Dinaid seems to emerge from the stone and to exemplify the idea that the image is in the stone and all the sculptor is doing is removing what is extraneous. The Gates of Hell held my attention until Terry was ready to leave. The figures portray an other-worldly nightmarish reality that is captivating.

That evening we made our pilgrimage to eat onion soup and then returned to the dorm to change and go out with the other girls. Instead I began to feel miserable and sadly lost the onion soup. I insisted that Terry go out and I stayed behind in bed where I was forced to be for the next three days, enduring some sort of stomach flu. As I began to feel better my appetite returned, and I asked Terry to bring me some cheese to satisfy a sudden craving. She brought camembert which neither of us had ever tasted before. We’d grown up on cheddar, jack, and even sharp cheddar and Swiss. Unfortunately, coming off the flu, I couldn’t stomach camembert, and we left it on the window sill outside— it was too stinky for us! (In defense of our honor and cultivated sophistication, we now both love it!)

In spite of the fact that I’d “wasted” three of our precious days in Paris confined to bed, we were ready to continue our journey and made a day trip to Versailles, just 20 kilometers southwest of Paris. Our wanderings through the vast gardens (almost 2000 acres—not that we wandered through all 2000) satisfied our cultural quota.

After a full day, we hopped the train back to Paris for one last night. We said goodbye to our student hosts the next morning and boarded a subway to the edge of the city. We extended our thumbs and headed east toward Switzerland. We were interested in the French-speaking part of the country since it was closest and we could speak the language. The journey was over 300 miles and took a very full day. We arrived in Lausanne, Switzerland, as it got dark and made our way to the youth hostel, just barely able to make out the view of beautiful Lac Leman in the waning light. 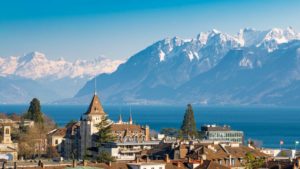 Read South to Switzerland, then on to Italy — Part 14