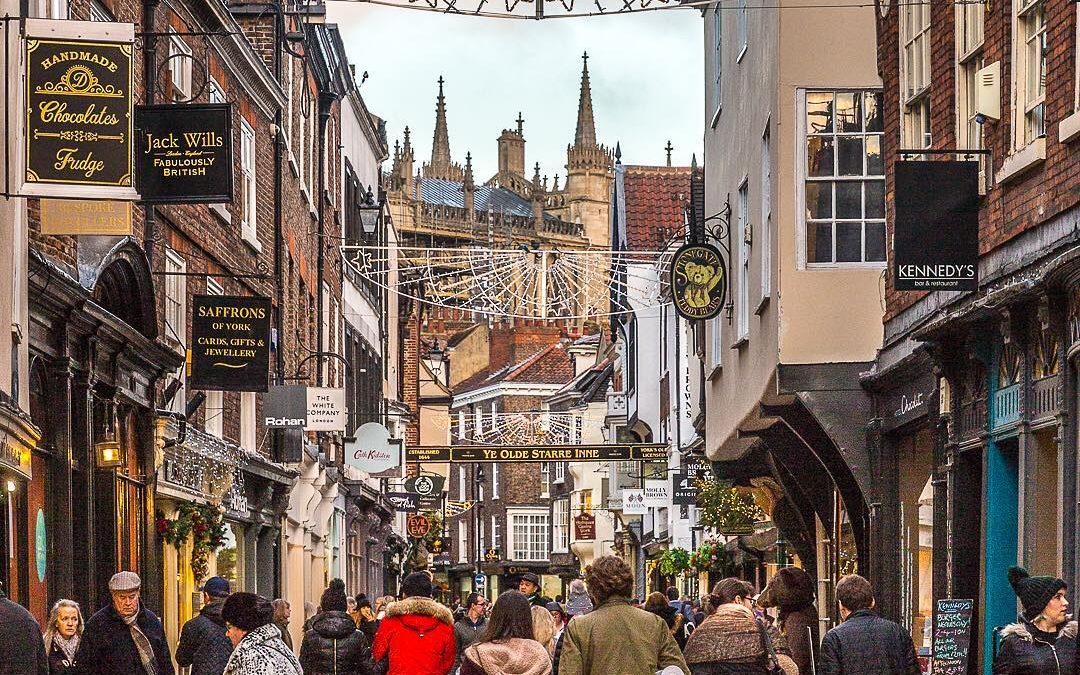 The first driver to stop for us was heading to Sheffield, a city more than 2/3 of the way to York. We were very happy with the offer and piled into the large vehicle with a mother and her two small children. After answering the mother’s standard questions, the children barraged us with goofy questions: does your mother know where you are? (More or less) What’s your favorite color? (Purple) Do you have a pet? (A dog) What’s her name? (Fig) Do you live near the ocean? (Pretty close) This continued non-stop until we exited the car almost three hours later. Thelma was kind and dropped us at a prime spot and within five minutes we were again on our way. “James” was headed to York to see some friends and knew right where the youth hostel was located. He offered to drop us there and to pick us up later that evening. His friends were having a party, featuring a local band, so we said yes, please.

The band was unfortunately not like other local bands to come out of England, like the Beatles. But the party was great fun. We drank and smoked our way to enough courage to get up and sing with the band. It reminded me of the time Terry and I had sung our way to winning the first place trophy at the 4-H Chicken-Q. We made up a hit song to a single chord: e minor, and very few nonsensical lines:

My name is Granny Goose. I ride a great big moose.

First place material in anyone’s book! We never recorded it and didn’t sing it that evening in York. But we did have fun at the party.

The location of the party was near enough to the youth hostel that we could walk back. Some of the shops and restaurants were still open. We were captivated walking through the ancient walled city of York. Had the Harry Potter books been written by then, we would have felt like we were walking into Hogsmeade. The main street was lined with timber-framed buildings leaning toward the center of the street and housing a range of touristy shops, lending an air of magic and mystery. We decided to explore more the next day as the hostel curfew was fast approaching, and we did not want to get locked out and to repeat our night of walking the streets in Bristol.

We entered the hostel quietly trying not to wake those already sleeping. In the dark we found our bunks and, after brushing our teeth, settled in for the night. I had trouble falling asleep, maybe it was the alcohol I’d consumed at the party, maybe it was excitement about our travels. Morning came too soon.

We’d decided to spend a second night in this captivating city, so we had a leisurely morning – breakfast at a local café recommended by the hostel staff and then a stroll through the alleys of the walled city. We’d perused our Frommer Europe on $5 a Day book and decided that we’d visit the York Castle Museum. With our official Student IDs we qualified for a discount on the entrance fee.

Our favorite exhibit was the recreation of the shopping district of York in the Victorian era. According to the brochure, extensive research was done on the shops so that the displays could be as accurate as possible. The street was originally opened in 1938 along with the museum, which was the brainchild of a North Yorkshire doctor, who collected and donated thousands of everyday objects throughout his life which he hoped would show people in the future how ordinary people used to live.

“This is so cool,” Terry noted as we walked slowly through the exhibit. “I feel like I’m actually there. Hey, look at that stereoscopic viewer! Sort of like those slide viewers we had when we were kids.”

“And look at that: Terry’s Orange Marmalade! I wonder if we can still buy that,” I exclaimed when I saw it. Terry was astounded. Even though it was Joseph Terry’s Marmalade, it was still disconcerting for her to see her name on a label from long ago Britain.

We also loved the ice cream-making exhibit. The most fashionable way, we read on the museum placards, to serve it at well-to-do dinner parties was molded into the shape of vegetables or fruit. Two favorites were cucumber and asparagus. “That’s so weird,” I remarked. “Hard to imagine ice cream in the shape of asparagus. It’d be a shocker to bite into it. You’d expect savory and get sweet.” Mrs. Agnes Bertha Marshall, the celebrity cook of her day, wrote The Book of Ices in 1885, and called them “some of the prettiest dishes it is possible to send to the table.” Ice cream was made with a base made of water, cream or custard, then flavored with sugar and fruit pulp. Concentrated essence and food colorings were also added. It was frozen using an ice cream machine, a cylindrical tin container surrounded with a mixture of ice and salt inside a wooden outer container. The mixture had to be continually stirred using the machine’s handle so it started to freeze evenly before being molded. Not so different from the ice cream maker our mother used at home in California.

But chocolate was not mentioned. “As far as I’m concerned, it is not worth eating ice cream if it doesn’t contain chocolate,” I declared. My favorite at the time was Baskin Robbin’s 31 Flavors Jamoca Almond Fudge, coffee ice cream with almonds and fudge coursing through it. Terry and I both felt inspired after viewing the ice cream exhibit to find some. So, we headed to the museum café. Prices there were beyond our limit so we left the museum and found a small shop selling sandwiches on a nearby side street. Even though it was summer, the temperature that day was cool and didn’t support indulging in ice cream. Cadbury’s chocolate (which Terry had discovered on our first day in England!) had to suffice. It did the job quite well.

After lunch, we continued on to York Minster, a world-class cathedral with its medieval stained glass and stone masterpieces. It’d been there for over 750 years in its current incarnation, and was in constant repair. Fortunately, the stairs to the tower, all 275 of them, were open and we were able to climb to the top and access a stunning view that stopped the breath (as if that climb were not enough to do just that). “That took care of the chocolate bar. Well, the first one anyway,” said Terry as we gazed at the fantastic 360-degree view that took in York’s magnificence.

Read To Whitby, with a Little Personal Diversion — Part 10