The most famous of Whitby’s landmarks, the ruins of St Hilda’s Abbey sit at the top of a mammoth 199-step staircase. That’s where they’d put the town’s youth hostel. So up we climbed. We signed in and left our backpacks there. The hostel wasn’t open for occupancy at that time of day, so we headed back down the steps to the charming town. Fishing boats lined the harbor. We strolled the promenade and pier and stopped for fish and chips, knowing that the fish we were eating had just arrived on one of the returning fishing boats. The town was peaceful, with the sound of hungry gulls and clanging masts.
Knowing we had to climb back up the steps we didn’t stay late in town. By the time we returned to the hostel it was open. Though it wasn’t full, there were plenty of other students to hang out with in the common room. It was in those hostel common rooms that we all shared our adventures, making them more real in our minds, cementing them into our memories. It was also a way for us to learn about where we might want to travel next. In our case, Edinburgh was beckoning.

We hitched rides heading west then north, toward Scotland. Our route crossed the moors, desolate and bleak on that heavily overcast day, and then headed north on the A1, a major north/south roadway. Though we were tempted to visit Glastonbury after many of our friends reported that it oozed “spirituality,” something that attracted us all at the time, we instead made Edinburgh our northernmost stop in Scotland, opting for the castle and fanciful sights.
The youth hostel was comfortable enough, in a practical way. It wasn’t a great place to hang out, however, so we dropped off our belongings and hit the pavement in the direction of the castle. On the way we noticed a tour bus and decided to take advantage of an easy way to orient ourselves toward Edinburgh’s major sites.
The tour lasted an hour, some of it interesting, some of it boring. During the boring bits we scanned the crowded sidewalks for familiar faces.
“Terry, isn’t that Clare, the girl who was in that play with you last quarter?” I asked as we passed a major intersection.
“Oh, my God. It is! She wasn’t even on our charter flight. She’s with John, the guy who played Cicero. He was terrible! She was pretty good. Wonder if we’ll see them at the hostel,” Terry pondered. She did not, however, give a shout out to them. We’d made it a game to see how many friends we could spot. We had played car games since our childhood, like the alphabet license game where you had to find the letters of the alphabet in succession on license plates we passed and that passed us (rare when my dad was driving!). On this trip’s game, we’d found a friend in every city. We were able to keep that up during our entire trip, even in the tiny towns we visited. There was no privacy or anonymity on the planet—that we knew for certain.
Since we were able to get off the bus at any stop along the route, we decided to alight at the castle. The entrance fee was high, but with our Student ID’s we were given a large discount. It was already 3 pm and closing time was 4:30 so we didn’t have long for our visit. 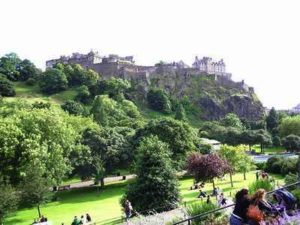 We took the short steep walk down from the castle to the center of town where we looked for a café or cheap restaurant. We weren’t shy about asking locals where to find the best victuals. However, no one was forthcoming so we decided since it was still light out and pleasantly warm, to find a grocery shop and to purchase dinner and tomorrow’s breakfast food.
“Excuse me,” I said at the first food stand we encountered after making our decision. “Could you please tell me where the nearest grocery store is located?”
“You are in the center and there’s really nothing close by,” replied the girl who was selling meat pies at this particular stand.
“Nothing?” I complained. “Not even a convenience store?”
“No,” she responded.
“Any good cafés?” Terry piped up.
“That you’ll find not too far. Follow this street to the next main intersection and turn left. Take the first right and you’ll find it on the right about two blocks up. It’s not very expensive, the food’s good, and they have music starting at 9 pm,” she said.
“Thank you!” I said. That meant, of course, that we needed to find a snack—and meat pies weren’t it. We thanked her and continued in the direction she’d indicated. We were walking through the long, beautiful park below the castle that flanks the main road through Edinburgh. Abundant flowers and walkways make it very popular with both tourists and locals. Across the roadway we spotted a small café where we stopped and ordered some tea and cakes.
Cakes and other sweets are my downfall—Terry’s too. We were on target to try all types of sweets on offer. Terry was specializing in chocolate bars. For me, it was whatever caught my fancy in the many, many patisseries.
We explored the streets and shops of Edinburgh until about 8 pm when we stopped for dinner at the café and stayed on for the music. The band was not at all memorable!
Surprisingly, in spite of the great beauty of Edinburgh, we were ready to leave sooner than expected. The next day we headed west to Glasgow, a stark contrast to Edinburgh. Even though we hadn’t had a spectacular time in Edinburgh, Glasgow seemed dim, dark, and lifeless in comparison. We did attend a classical music concert, but even that couldn’t dispel the feeling of despondency that crept into our bones as we walked the grim streets. We quickly packed our backpacks and headed south, for a quick trip into Wales.

Read All the Way South and Across the Pond — Part 12