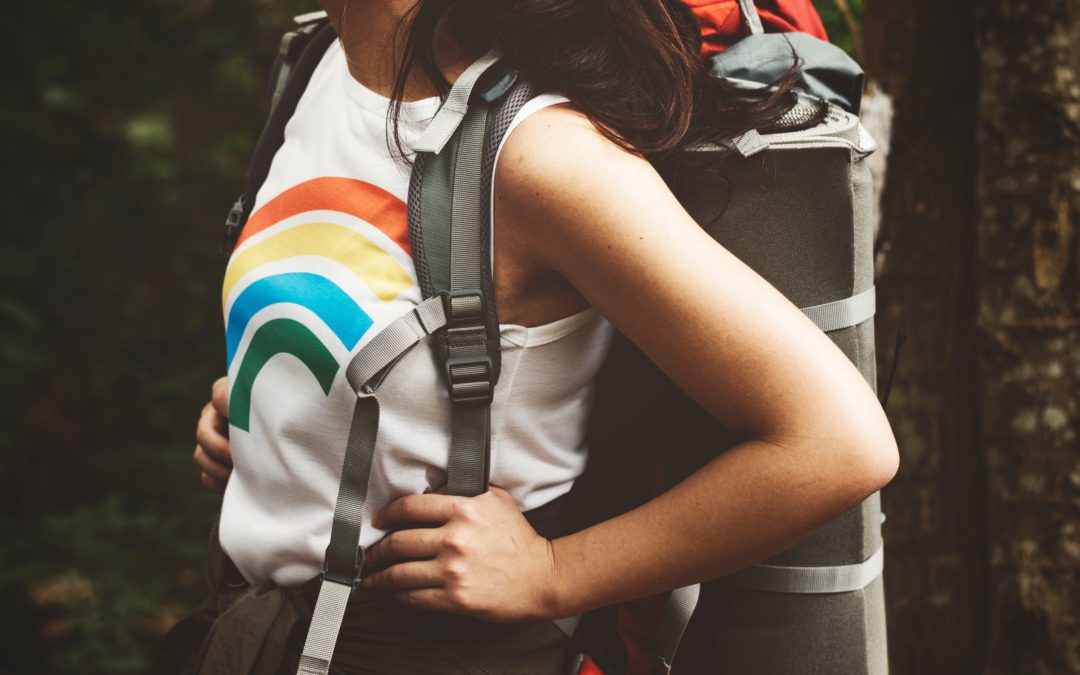 “How many pairs of jeans did you pack, Lor? I have three. Do you think that’s enough to last for 7 days? I figure we have to do a wash at least once a week, right?”

“Will they fit with everything else? Underwear, bras, shirts, sweater, rain jacket, two pair of shoes, sandals, leotard, towel, toiletries. What else? Do you think we’ll do some hiking? Should one of those pair of shoes be hiking boots? Maybe a skirt for something?”

We had more questions than answers and no one to ask – our parents had not been to Europe before. So we were guessing, assuming that what we wore to school was what we’d wear traveling in Europe, that everywhere in the world was as “hip” as northern California.

We had just finished our spring quarter finals and were getting ready to leave on our first trip abroad. It seemed like a dream to contemplate hitchhiking around Europe. We both hitchhiked a lot, especially between home in Santa Rosa, California, and university in Davis, about 90 miles distance. At the time it was a major mode of transportation for students. We’d even been picked up by a police officer one rainy day. He dropped us off at the dorms. So far neither of us had had any bad experiences, so we were perfectly comfortable with the idea of traveling thousands of miles at the mercy of kind strangers with cars.

Terry and I boarded a charter flight leaving from Oakland, California, along with about 250 other university students, festooned in long braids, tattered blue jeans, and bursting backpacks. We were bound for London on our first trip abroad, at the pinnacle of the hippy era, the summer of 1970. After three and a half months we’d return to Oakland from Amsterdam. $380 bought us a ticket there and back.

“Oh, my God. Did you see Stephen in the far back? And John is here, too. Sitting about three rows back,” Terry whispered as she crouched down in her seat. “I can’t believe it. How can we spend the entire summer in the same place without running into them? OK. Europe is big, right? We can do it.” It wasn’t really a surprise to see so many “acquaintances” aboard the flight. It was a charter sponsored by the University of California, and we were all students at one campus or another, Berkeley, Santa Cruz, and Davis mostly since we were leaving from northern California.

“I doubt we’ll run into anyone we know once we land and get out of the airport,” I responded. “Hey, Anne! I didn’t know you were going to be on this flight. Cool. Maybe we can meet up somewhere.”

“That’d be great! Don’t know where I’m headed exactly, but we’re starting in the same country, so let’s plan something,” Anne replied with enthusiasm. She’d been one of my roommates and I’d “inherited” one of her dog’s puppies. I named her Fig, not because she looked like one, but because I liked the name, and the fruit. Anne was an artist and a great niece of Jack London. She’d grown up on Jack London’s Beauty Ranch, not far from where my family lived. One weekend we had a party up at the lake at the top of the ranch. Lots of drugs and rock and roll. Her grandparents weren’t too happy about it and came after two of the late arrivers with a shotgun. Another time Anne told me a story about her great aunt, Charmian, Jack London’s second wife. Charmian lay dying, in the bed in Anne’s room, glanced up at the window, and said, “Wait, Jack! I’m coming!” And she died. When Anne told me we both got goosebumps.

The plane took off and we settled in for the long flight. It was fairly uneventful, though we were all too excited to sleep. Upon landing we all dispersed and Terry and I caught a bus into the center of London. Our first destination was the youth hostel near St. Paul’s cathedral. I barely remember climbing into my “sheet sack,” something we each had to supply to stay in youth hostels. They supplied blankets and bunk beds. I slept like a rock.