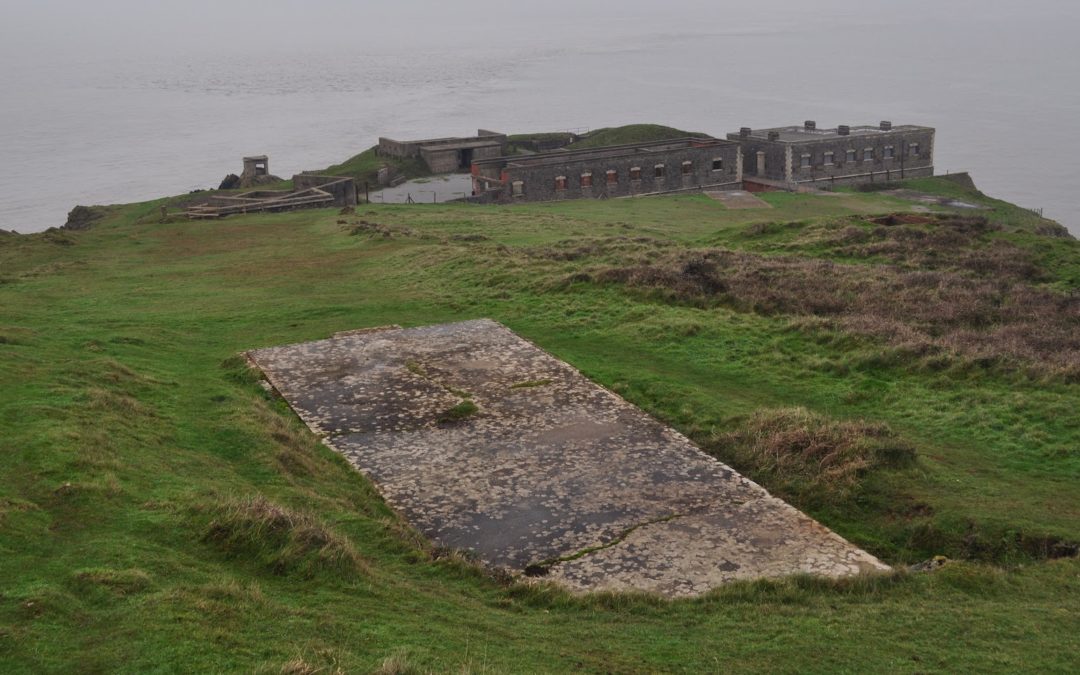 There were even hearths in some of the rooms. I began to dig around in the ground with a stick. “Hey, look what I found! I think it’s coal. Can anyone tell?” “Let’s try burning it and see what happens,” said Terry.

It did, so we burned it that night for warmth. Having a fire made the stark environment cozy. I even took out the flute I kept tucked away in my backpack and enjoyed the echoes in the old concrete barracks.

Though we felt isolated, we did see a few other campers and hikers in the area.

On the morning after the second night in our personal fortress, we picked up our belongings and hiked back to Robert’s car. We drove half an hour to Bristol, to the Juicy Lucy concert, held in Colston Hall, where the Beatles had made their debut on 15 March 1963. We parked the car and after getting our bearings, looked for a place to stay in town—it was too far to drive and hike back to our coastal retreat in the dark. Ever frugal, we asked around for suggestions. Robert approached a likely-looking prospect and asked, “Do you know anywhere we can kip for the night?” She didn’t hesitate and replied, “There’s an abandoned house just up the road where I heard a lot of people are crashing.” She gave us directions and we found it easily. Robert parked the car in front of the house and then we left on foot to find a restaurant where we could eat lunch and also use the restroom to clean off some of the dirt we’d collected over the previous two days. After a visit to the loo and a hefty portion of fish and chips, we were clean and full and ready to party. We walked over to the Hall and bought our tickets. We still had a little time before the concert started at 9 pm, so we decided to explore Bristol.

After half an hour of walking I said to everyone, “This is boring!” They agreed so we stopped for a pre-concert lager and lime at a local pub. By that time Terry and I were accustomed to the drink and, though not big beer drinkers before, were happy downing a few lager and limes anytime, anyplace. It tasted like soda pop for grown-ups. After two beers apiece, we walked over to the concert hall. The hall was grand and impressive, striking and elegant. It was packed with hippies ready to rock and smoke, things we were happy to encounter.

The first band was unremarkable so we basically ignored them and walked around, smoking when we were invited. When Juicy Lucy came howlin’ and wailin’ onto the stage, the crowd went nuts. Their blues had style and class. Even after having seen top name bands at the Bath Festival, we were impressed. Juicy Lucy had some of the finest musicians of the day. We danced for two hours non-stop.

When it was over, we searched for an open restaurant, found none, so made our way back to the house we’d decided to stay in. We grabbed our things out of the car – sleeping bags and some snacks – and entered the house through an open window. That was the first clue that this was going to be an interesting night. There was no power in the house, so we made our way mostly by feel and the faint light provided by the street light to the first room we found. In it we spread out sleeping bags in a row, one next to the other. We were feeling fairly nervous about the situation since we had no idea who or what else was in the house.

We were all settled into our sleeping bags going to sleep when we heard footsteps coming from upstairs (we knew there was an upstairs because we’d seen that from the outside). We were all startled awake. I whispered, “What was that?” Then we heard it again. Terry suddenly yelled, “Come out right now or I’ll shoot you! I have a gun!” No response. That was it. We quickly decided that we had to get out of the house immediately. We stored our bags and Jim in the car, and Terry, Robert, and I began walking because there wasn’t room in the car for us to comfortably wait for morning. We took off looking for somewhere warm where we could sit. The fog was heavy and we were not warmly dressed, so it was not a pleasant walk.

The only place we found to go inside was the police station. They were not pleased to see us. So off we went and walked until dawn broke. At that point we made our way back to the “haunted” house. When we were sure that the house was safe – we saw some others come down the steps and leave – we retrieved our bags from the car and went back inside. This time through the door.

From Bristol, Robert and Jim were heading back to London, Robert to his job as a precious stone setter, and Jim to continue his journey to the continent. Terry and I were heading to northern England and then to Scotland. So we had to say goodbye to our new friends with whom we’d shared such fun adventures.

“Jim, here’s my name and address back in the States. Maybe we’ll be able to stay in touch,” I said with very little intention to write (there was no email back then – only snail mail). But I had to say it. “Have great travels.”

Terry said essentially the same thing and then she turned to Robert. “Robert, maybe we can catch up when Lorry and I return to London in a few weeks.”

Robert replied, “Of course. I can show you where I work and we can go out for a coffee. Here’s my number. Call when you’re back in London and we’ll set something up.”

“Great!” I said with much relief in my voice. I really didn’t want to have to say goodbye to Robert.

Jim and Robert climbed into Robert’s car and we waved them off then turned with our thumbs out to continue our journey northward. First destination: Oxford, our first taste of the English academic aristocracy.