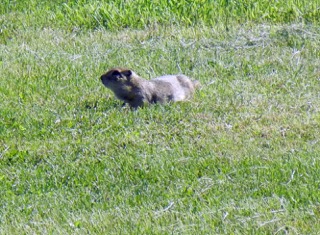 Yes, we’re traveling in the US, despite Corona. Crazy, many of you think, and you may be right, but we survived what we saw as the riskiest part of the plan – the flights – and we’re doing just fine. It helped a lot that the longest flight, from Tel Aviv to Newark, NJ, was mostly empty, so we could each stretch out over 3 seats and get a relatively good rest enroute. When we arrived in Milwaukee mid-morning on May 13, our friends met us at the airport. They drove 2 cars and we took one of them back to their house while they drove themselves back in the other. Smart planning!
Later that day, we retrieved the truck and trailer from storage and parked both in the driveway. We dewinterized the trailer and filled the water tank, showered in the trailer and promptly passed out in our own bed. We then spent the next 2 days stocking the trailer and taking care of various errands, along with visiting with Gerry and Sydell responsibly, including sporting masks. After 3 days, we moved a bit south to a county fairground near Racine, where we spent the next 4 or 5 days. The weather was quite rainy and a bit chilly, but we were able to get the interior of the trailer cleaned and travel ready and also recover from jet lag.

Our next destination was the fairgrounds in Sioux Falls, SD. We were one of two units camping there, rather than the usual 200 or so. The critters who live there were very visible on this visit, most likely because there were so few people there.

This little guy, I think, is a gopher. S/he lived a short distance from our trailer and spent most of the time running around looking for food and then diving back into her underground house where, perhaps, there were babies. We didn’t see them, but the season would make it possible. In any case, it was fun to watch her/him taking care of business.
One of our favorite sites in Sioux Falls is the falls of the Great Sioux River. 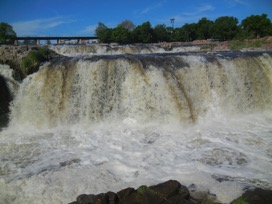 In the calmer parts of the river there, we noticed a mother duck with her ducklings. 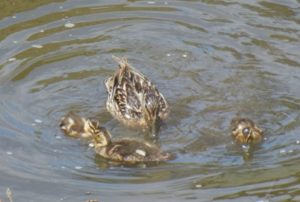 Our stay in Sioux Falls was productive in some ways, although we were unable to visit any of our usual haunts, since most public places were closed. But we were able to take care of some business at Best Buy. Their system was quite creative – they had a few employees, masked, meet customers outside the entrance to the store, determine their needs, and then the employees entered the store and returned shortly with the product the customer needed – in our case, a new virus protection product for our computers. As it turned out, we couldn’t install the product on our computers because we didn’t have the bandwidth on our hotspot and the library was closed, so we returned to Best Buy for suggestions. They made an appointment for us to return so that we could enter the store and have a Geek Squad employee install the product on each of our computers – at no charge. Terrific customer service, we thought, and we appreciated their ingenuity and flexibility.
We spent a week in Sioux Falls, just relaxing, poking around town, and generally being lazy. We then turned north toward a campground we stumbled across last summer in East Grand Forks, MN. It’s on the east bank of the Red River, directly across the river from Grand Forks, North Dakota. We took our time on the drive from Sioux Falls, spending the night at a Walmart in Fargo, ND. In the morning, as we turning onto the road from the parking lot, we stopped to allow this goose family to cross the street. Good thing there wasn’t much traffic at that hour! 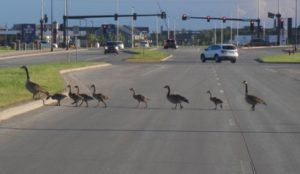 We’re sharing the campground in East Grand Forks with very few other units, since it just opened for the summer on June 1. There’s a bike trail that runs along the river, which Ed has enjoyed every day since we arrived and, once again, we’re relaxing, exploring the area, doing a bit of shopping, and appreciating comfortable weather. In Minnesota, restaurants are offering outside seating or takeout meals, whereas in North Dakota, restaurants are open for indoor seating. We’ve chosen, however, to enjoy our meals in our own house on wheels, at least for now.
It’s become clear, as we suspected, that this will be a low key summer for us, which is fine. It’ll be interesting to observe, as we travel, the differences between how things are functioning in the areas we visit. We’ll let you know!